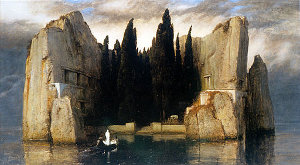 Three climbed through her hole before anyone else could move. Through the shaking fence we could see her walking in their sand. And then — when she turned around to wave at us — the bullets hit her.

We ran back to our car, started the engine, and drove. Three and the scissors still lying in the sand on the other side. In the rear-view mirror the soldiers trying to fix the fence getting smaller in the distance.

We didn’t expect to be back before the next morning; that road was bumpy. We went on and on and each bump we could hear the sound of the metal cutter hitting the roof violently up and down. Four got sick of it. She threw up in the sand and we had to leave her at the next gas station. I believe there were some Bedouins who were taking care of her.

Two and I never spoke again about what had happened. It was a long way to where that border ran that had always distinguished us from them.