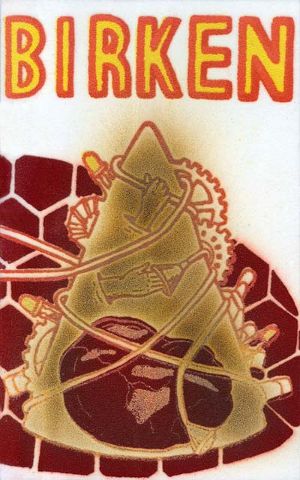 I once dated a woman who kept her brother in a cage. The woman’s name was Lana. Her brother’s name was Dave.

Lana and I only had one date. She’d suffered tragedy after tragedy, she explained over dinner — she’d lost her parents in a car accident and suffered a stroke shortly thereafter. “I was eighteen!” she said.

“Nowadays I think of myself in, like, a little glass case. And every once in a while I can see His face outside the glass.”

After dinner she took me home. As we walked up the front steps she pulled me close and said, “I feel this connection to you — like we’ve always known each other.”

She made eyes at me and opened the front door.

That’s when I saw the cage. It stood in the living room, beside the television. It was maybe six feet tall and just as wide. A man sat in it, reading — he had black hair and he wore a flannel shirt.

“Hi,” Dave said, without looking up.

“This is Kenneth,” Lana said.

Lana led me to her bedroom. “What’s the story there?” I whispered.

“Why is your brother in a cage?”

“Otherwise he misbehaves.” She ran her hands up my shirt. “I want you, Kenneth,” she said.

We lay down. She shuddered against me. “I have to be really careful. OK?” she said.

We took off our clothes. She was so passionate — she held my wrists and screamed out.

Before we fell asleep she lay beside me and said, “We’re blessed. Aren’t we blessed?”

I could hear Dave snoring in his cage.

Lana said, “Can we go to breakfast tomorrow?”

“We can bring a plate home for Dave,” she said.

But something terrible happened in the night. I woke up and Lana wasn’t breathing. I couldn’t wake her!

I ran into the living room. “Dave!” I said. “Your sister’s not breathing!”

The paramedics came. Lana’d died of a stroke, they said.

After they left, I sat in the living room. I said, “Dave. Should I open your cage?”

At the funeral they wheeled Dave’s cage out to the grave-site. He trembled inside it.

Later, I saw Dave at the grand opening of a pool hall. He was shooting pool with three attractive women — you would never have suspected that he’d lived in a cage.

“Good — I’m going to grad school in the fall,” he said. “Finally get my degree.”

There it goes again, I told my wife. What? she said. The strange animal, I said.

We were sitting at the kitchen table, discussing our marriage — my wife had just asked me a very thick question — when I saw the silver animal flash by the window.

It went hopping thataway, I told my wife. I stood up. This time I’m going to catch it.

Are you kidding me? my wife said. We’re in the middle of a discussion!

I’ll be right back.

One minute, I said, and I ran out the back door.

I reached the sidewalk just in time to see the animal skip around the corner. I tried to run, but I am not athletic — my extra weight keeps me from moving fast. I ambled to the end of the street, and the flashrat saw me and scurried into some bushes.

I approached the shrubs and began to search them. Then I saw the animal, sharping and tulsing against a root. I took a quick breath and leapt, shouting my attack cry: Yah!

It turned out not to be an animal at all, but the foil wrapper for a burrito — there was a Burrito Company logo tattooed on the foil’s shoulder.

I carried the foil home to show my wife, but when I got back I couldn’t find her — I looked in the kitchen, the living room, the bedroom. I called out her name and there was no response.

I sat down at the kitchen table and stared at the foil. Some time passed — an hour or two.

I lay my head on the table.

I thought you were an animal, I told the foil.

Then the phone rang. It was my wife. I just want you to know that I’m at my mother’s, she said, and I’m not coming back.

It was just a burrito wrapper, I told her, not an animal at all.

I can’t take the pain of living with you anymore, she said. I just can’t. I said, I don’t see what’s so bad about living with me.

She let out a teary sigh. Maybe that strange animal is a blessing in disguise, she said. Like I said, I told her, it’s just a burrito wrapper.

You would need to change so much, she said.

You don’t get it, she said. You don’t even know what changes I’m talking about. I’ll change in any way you want me to, I said.

I’m not sure you’re capable of these changes, she said.

I said, It’s so funny that it turned out to be a burrito wrapper —

Are you listening to me? my wife said. Are you hearing anything I’m saying?

— and not even an animal at all, I said.

My wife hung up the phone.

That was my wife, I told the burrito wrapper.

The foil said, What’s her name?

Her name is Andrea, I said.

I liked her, but she was really hairy. She had hair all over her body. When we first met for lunch I couldn’t get over it.

And it wasn’t just her body hair — everything in her life was hairy. She told me about her hairy car. The small house she owned was covered in shag. Even her street was furry, she said.

Still, we had a lot in common — we were both from big families, we both liked prog rock — and I didn’t want to let a little hair keep me from what might turn into an important relationship.

So I asked her out to dinner.

During the meal she said, “You know what?”

“I have an interview tomorrow.”

“Which is actually something I’m really passionate about,” she said.

“Do you work in human resources now?”

“Right now I work in retail.” She stuck out her tongue. “But my passion is staffing.”

After dinner we stood outside and hugged — all that hair! — and I said, “Hey — good luck tomorrow.”

“Call me and tell me how it goes, will you?”

She called me that night; the interview had gone well. “I think I have a really good chance — they seemed to really like some of my ideas,” she said.

“Eee — I’m so excited!” she shrieked into the phone.

We agreed to talk in a few days and plan a date for the following weekend. She called me again just two days later, though, and when I picked up she said, “I really need to talk to someone — would you mind coming over?”

I told her I’d be right there. My car struggled on the hairy pavement. I rang the hairy bell.

She answered the door in pajamas. Her hair was all over the place. “I didn’t get it,” she blurted.

“They just called. I was a finalist, but they gave it to someone else.”

She led me to the couch. “The woman on the phone said the other person just had more experience.” She looked into her lap. I thought she might cry.

“I’m never going to get out of retail,” she said.

“You weren’t chosen for this job because there’s another job out there — one that’s even more right for you,” I said.

She rolled her eyes. “You sound like my sister.”

“If you truly want to work in staffing, and you keep working towards it, it’ll happen for you. Everything you want is right around the corner.”

“But it’s there, and in time it will make itself known,” I said.