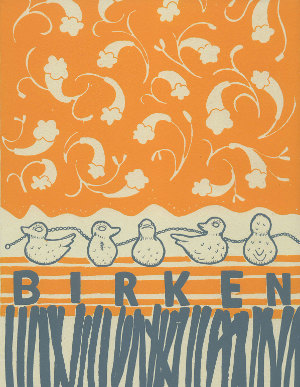 When my turn came, I dreamt the ambassador wore a coat of elk-hide, cured so that each hair curled in place. He carried its bulk without effort, moving lightly, as if he wore only cloth. He had blackened the lids of his eyes with a cosmetic, and his lips, fleshy and bulging, lengthened his face. He was large, taller by a head than most of our men and so broad that, had I stood near him with open arms, his shoulders would have run from one of my elbows to the other. But even in dream I dared not approach him.

The ambassador unfurled the scroll, discarding its silk tie, and summoned the villagers. His words escaped my memory, but their weight stuck: the marshals had declared a new levy, and we were to surrender ten of our sons and fifty head of cattle. This disaster had threatened for several nights’ telling, but it struck us like a blow. I looked at the other women in the square, imagining whose child, whose homestead would go to satisfy such appetite.

As I spoke my dream to the morning assembly, their moans at my report echoed the wailing of the crowd in the dream. I looked at them and knew the flat days awaiting them: some would go to tedious work as office clerks or attendants, others to long hours of physical labor in factories or as domestics. All paid heed to me; all waited for word of what I had seen. As others had given report in the days preceding, so then did I. Yet as I spoke, I saw not so much their familiar faces as the dream itself: the cruel face of the ambassador, its malice more real at that moment than the friends with whom I dined every day.

The next morning, after a dark sleep, I joined the others. Brenda stood to report that she, in her turn, had dreamt the ambassador’s demands. She told that he had held up a battered helmet, forged for one of our rebels, and declared that none could stand against the marshals. “He spoke as a bear growls,” she said, “boasting that he would have his pick of our sons, threatening to make soldiers of any that survived the year, promising to return the others for burial if we made the muster by the fortnight.” She told of the terror that had gripped the square even as the women kept their heads bowed, and the savor seemed to leave our breakfast as despair spread across our assembly.

“But hold, sisters,” Brenda called. “At the peak of his gloating, from beyond the village gate, a horn rang out, and another joined it, and another still. And as the ambassador gathered himself, there came a blast so clear the mountain itself seemed to shake. Yea, sisters, I dreamt it even so.”

Her testimony ended there, and the demands of our waking days called us to our separate occupations, but each of us knew beyond words the hope her vision heralded.