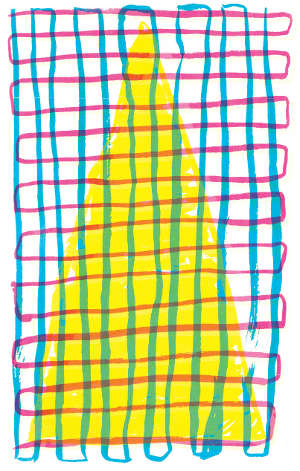 Mr De Ville, of De Ville, Collins, and Haughney, didn’t understand what the woman said when she turned around in the queue at the GPO. She was facing him, and it was clear she was expecting some kind of answer for the gibberish she’d just uttered. What was that, now. Mr De Ville didn’t come down to the Post Office on his short lunch break to be pestered by working-class, tracksuit-clad creatures.

Appalling, it was. Never mind that “working-class” reference. It was doubtful the simpleton had ever lifted a finger in her life for anything. How could you not know? Mr De Ville considered himself quite the liberal, but he simply could not understand how you wouldn’t know the day of the week. He could imagine being unsure for part of a second, but surely your mind found its footing back, computing what meetings one’s had, and the ones to come. Thank God that woman went up to the counter then, as her turn had come. What people you had to mingle with. It was revolting, really. In no time it was his turn. Inexplicably he ignored the clerk and ran out after the woman.

Mr De Ville certainly had no idea what he was going to do, or why even he was doing this. It was his first time following anyone. He just had to see how this woman lived, where she came from. Her kind was so alien to him he had to know. They took a few turns along red-brick rows of houses which made Mr De Ville shudder. Suddenly an ambulance sped alongside him and screeched to a stop, and two goons in white coats jumped out of the back and onto the girl. “Sarah, come with us now, and no funny stuff!” Everything had an explanation, thought Mr De Ville, relieved.

Mr De Ville went straight back to the office, not bothering with the business he had in the Post Office. At his desk, he couldn’t focus on any of the cases he successively tried to have a look at. He just could not get that clueless creature out of his mind. What a cheek, to be out there, and make a show of yourself and your ignorance. He wondered how such individuals could function, how they survived. The afternoon passed and Mr De Ville couldn’t get his mind off the issue for long enough to get any work done. Soon it was time for his meeting with Mr O’Neill. It was a formality, a simple contract to be signed — everything had been reviewed already. As the senior partner, Mr De Ville took the pen first, then froze. His three associates and Mr O'Neill were watching him. He could not for the life of him remember the date. He started sweating huge, obscene drops, and finally had to mumble “What is the date?”

Mr De Ville followed the girl for a good few minutes, among what he would later describe as “squalid working-class housing,” turning left, right, walking faster or slower along with her, a real detective. At some stage he turned around and saw a man he recognised. He was dressed in cheap casual clothes, although much more tasteful than the woman’s. The man jumped back around the corner when Mr De Ville turned around but not fast enough as to be unseen. That man had been standing in the queue at the Post Office, and Mr De Ville had turned to him and commented “What a dreadful place, isn’t it? My butler just died before he could run this errand for me. And here I am! Ah!” What was this now — you try to be courteous and make small talk, and you end up with a stalker.

Mr De Ville followed the girl to a row of red-brick houses. Oh, the bleakness. She entered a house. The brass number on the door, an 8, had fallen sideways, looking now like the common symbol for infinity. She’d left the door slightly ajar, and a bright but somehow mellow light seeped out from inside. Mr De Ville’s curiosity got the better of him — he pushed the door open and stepped inside. A pleasant warmth enveloped him and he started walking forward, following the sound of a soft tune. A flute or something. There were no walls he could see, only a yellow-orange mist that seemed to be limiting the view. It soon started to clear up, revealing grass under his feet, grass of a darker shade of orange than the sky above. A sky-blue stream slithered away into the distance, and finally Mr De Ville saw where the music originated: a little man with curly red hair, a goatee, and a goat’s body from the midriff down who was sauntering around, playing on a pan flute. The tune seemed to be for the benefit of a dozen girls who lazily danced in a circle, wearing only thin veils and garlands of flowers. He recognized the girl from the Post Office there, but she abruptly left the group and walked towards the stream. In two fluid moves she shed her tracksuit, first her top, then her pants. She was naked underneath and as she dove into the water Mr De Ville beheld her perfect body, white and smooth, the perfect round shape of her bottom and breasts, the ivory tusks of her legs, last to disappear under the surface. Mr De Ville felt dizzy. With no wall to lean for support, he fell over on his behind. When he opened his eyes after the fall, he saw the street, the red-brick houses, and the door slowly creaking closed.

Mr De Ville did not feel quite right following that girl, but his curiosity was too strong and he took turn after turn along rows of red-brick houses, until an ambulance screeched to a stop next to him. Two goons in white coats came out the back, and one told the other, “Him there, with the top hat.” Before Mr De Ville knew what was happening, he’d been grabbed, a strong arm locking under his own frail ones.