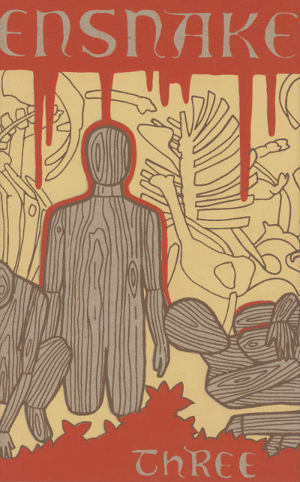 When Jonah was a child, a disease spread from the mainland. As a strict precaution, and to prevent transmission to humans, over ten thousand head of cattle were culled. On television, farm workers dragged the carcasses into piles. They were planned to be set alight at sundown and burn through the night but the piles were much too large. Into the morning, plumes of smoke rose behind the hills.

From the school bus, the smell of charred beef was terrific.

At an urgent care facility in the city closest to the lake, just after two in the afternoon, a man checks in complaining of sharp pain in his ribs. He is driving home from work when a truck forces him to brake suddenly. It would be unremarkable, but when the seatbelt presses into his torso he feels discomfort disproportionate to the speed he is traveling. The doctor examines him. Sure enough, three ribs are cracked, and he is sent to a variety of specialists who will test his blood, examine his marrow, and weeks later explain in placid but somber tones that he is suffering from a rare and inoperable cancer.

The man is Jonah’s brother. For the next fifteen months, Jonah cares for him at home. He feeds him plates of avocado or mashed banana. He helps him urinate. He adjusts his position in bed with the lightest possible touch until even tiny movements cause excruciating pain, until Jonah can do nothing but watch as his brother’s bones turn to dust. And Jonah dreams of a child, not of flesh and bone, free of this brittle frame: a wooden boy made in the image of his brother.

Anya’s hair loss has nothing to do with cancer. Months after her second child is born, she begins to shed. The doctors say it is temporary, that given time it will all grow back. In the photograph she is in her twenties. She stands at the harbor, a scarf about her head. She is wearing a dark jacket, hands in pockets too high on her torso. Behind her: dinghies and a schooner battened down at the jetty. It is November. She is smiling.

Anya’s hair never grows back. Doctors cite the initial cause as the stress of childbirth. “This is common,” they say. In rare cases, hair loss may continue until the underlying stressor is dealt with or removed. “So it is because of my son?” Anya asks the doctor. It’s very possible. He is a quiet boy, more withdrawn than his brother Jonah. And without possible recourse, Anya raises them together by the harbor. She never wears a wig. She works as a baker in a small shop off the seafront. Her sons grow older. After she retires they move her inland to a modern efficiency only minutes from the doctor. She is happy there and the doctor is kind. Her sons visit every second Tuesday.

When a whale dies, its corpse becomes a city. It sinks to the ocean bed and sea creatures swim through it. It becomes their shelter. Decomposition is both life and a second protracted death that comes after death. This is the way people talk of The Sovereign: the way a city looks from a plane, his neck pocked by arable fields, his cul-de-sacs and hedgerows. When I was younger I saw no distinction between God and the sun. Buratino knows the same: it is not enough to be real. He was born for the clouds.

The wooden boy, son of Jonah, born of Anya’s line, carved in the image of a man with broken bones. In the train station on the mainland: so hungry he steals the jug of cream from a coffee counter and drinks it in the public restroom, retching immediately, heaving in front of the mirror. Buratino, the schoolboy, the vagrant. Buratino, the clown.

The photograph was taken in a room he remembers. The wooden boy in grade school, his teacher a huge man, a former rugby player unable to fasten his top button owing to the girth of his neck. On the first day of school, he splinters a ruler against the blackboard. Buratino reads this as a statement of intent. He is the same teacher who in health class explains how the penis will in time grow longer and thicker. In a lesson on the Reform Act, a girl asks, “Sir, what’s a brothel?” and he tells her to look it up. A year or so later, when Buratino has passed into middle school, it is announced in chapel that the teacher is suffering from leukemia. He leaves work and dies. That month, the vice-principal shoots himself in the chest with an air rifle. The pellet misses his heart and he bleeds to death over a period of several days. Turn your head slightly to the left. That’s it. Big smile. Click. And another. Big smile.

It is not how Buratino imagines a brothel to be: a series of full-length glass doors that open onto the street. Crowds of young men gather around them. Families walk by. A large golden penis spurts water into a decorative vulva-shaped pool. From behind glass the women beckon. They hold their doors ajar. Blow kisses. He joins a crowd. They cheer as he approaches the window. “Where are you from?” (because he has no idea what to do). “Brazil,” and she pulls a thick curtain across the glass. She snaps a condom onto him, limp. Nothing is working. She is already at the washbasin when he comes into his hand.

His first trip to the warehouse store, it is Flag Day. There is a woman with orange skin and thick lashes standing by a table of discounted jean shorts. She is acting strangely, stroking the denim, unfolding the shorts, folding and replacing them. Buratino stands close to her and she touches his wooden arm, runs her fingers up until she holds his biceps for a moment. He follows her into the men’s restroom and fucks her in the stall farthest from the door. She is standing with her legs apart over the toilet and her hands on the back wall.

Whenever he tries to remember the woman’s face, Buratino sees only the wife of his dentist when he was a child. She has the same dark, wavy hair; her lips curl down too much so she is always scowling. The girl in grade school who asked about brothels, her name was Sophie. She once claimed that she saw the queen walk past her bedroom window. What did you do? I sang a song and waved a flag. What song did you sing? These things you should know about me.

Once a month I leave the mainland to buy green coffee. This morning, the woman at the register spills a cup of thick blood just as I am ready to pay. It splashes over my neck and shirt. Behind me somebody screams. As the cup rolls off the counter I throw out my hand to catch it before it hits the floor. Some of the people in line start clapping. The woman at the counter explains that the blood is actually raspberry cordial and we all shriek laughing. In fact, I am screaming as I walk out the door, wailing across the parking lot, home with no green coffee and bloodstains across my arms and chest.

Every six weeks I see a blood doctor. He is also a cancer doctor so many of the others in the waiting room wear scarves over their heads or carry a cane. As I do not have a job and only rarely leave the mainland, I’ve begun to think of these people as my colleagues. The magazines in the waiting room have titles like “Heal Today,” “Survivor,” or just “Cancer.” I do not read the magazines. I look at the posters of men and women cycling through the woods. The sun is always setting. A night is about to begin. Nobody knows what this night will bring or if a new morning will follow. But night never comes. It is always ready to arrive. It is always just past. This is the truth of the waiting room.

I don’t know how I look in the photograph. Nor can I imagine the background. For a long time I thought I had memories like photographs but I realize now that they were memories of photographs. In one, I am on a beach. In another, a jetty, and the sky is grey. I grew up in a small house by a rail track overlooking a cemetery. I used to climb on the roof of the coal scuttle and wave to the people on the trains. My elementary school was a convent that shared a wall with zoological gardens. I saw tapirs, okapis, and a pygmy hippo every week until I was twelve. If I piled up all the lies I told when I was younger they would cast shadows on the sidewalk like buildings in Manhattan or Chicago. I don’t leave the mainland much anymore. I am expecting no visitors. I have learnt the names of thousands of diseases but I cannot tell you mine.